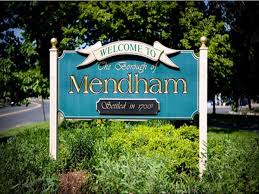 Mendham, NJ Morris County has a population of just over 4,900. The borough was founded in 1749 and incorporated in 1906. Several notable people such as singer Whitney Houston and trombonist Richie “LaBamba" Rosenberg as well as Peter Dinklage of Game of Thrones fame called Mendham home. The area also supports Van Dessel Sports performance bicycles. Mendham is located just 12 miles from Tuxedo By Sarno Rockaway store location. Outdoor weddings often take place on the grounds of the many beautiful parks, such as Town Lake in Mendham.