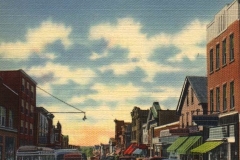 Freeland became a settlement in Luzerne County PA in 1844 and has a population of over 3,500. Although Freeland was initially a coal mining town it later developed into a farming community considering the vast amount of fertile land in the area. Freeland is 22 miles from the Tuxedo By Sarno store located in Wilkes-Barre, PA. Originally known as Birbeckville after the settlement’s founder, Joseph Birkbeck, the towns name was changed to Freeland in 1876.