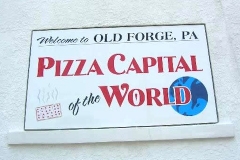 Known as the Pizza Capital of the World due to the number of pizza parlors.  People travel to Old Forge to do “pizza crawls” as they travel from one restaurant to another, trying a cut at every stop. The city is also the home of a unique style of pizza named, aptly, “Old Forge Pizza.”