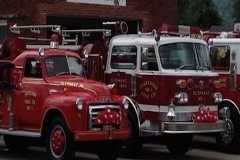 Olyphant has a population of 5,100 and has supported a manufacturing industry of blasting powder, cigars, silk, and steel and iron goods. Olyphant was originally named Queen City but was later renamed after George Talbot Olyphant who was president of the shipping company, Delaware and Hudson Canal Company a prominent employer.